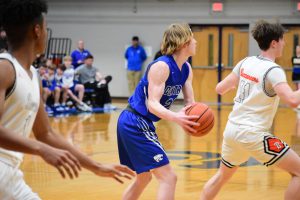 The Wildcats played one of their best games of the season last Friday night against the Beech Buccaneers. This was their first game of the district tournament and it was a very close game for both teams. Beech is a very good basketball team as they were ranked second in the district, but the seventh ranked Wildcats held with them until the very end. The final score was 59-56 with Beech winning. It came down to the last couple of plays, but the Wildcats ended up losing in the end. Caleb Lawrence was the key player for the Wildcats as he was their leading scorer with 20 points. Lawrence was also a very efficient shooter as he went 4-8 from three point range, and shot 6-6 from the free throw line. The Wildcats also did a great job at containing Beech’s star player, Kristian Shaw. He normally scores a lot of points for the Buccaneers, but in Friday night’s game he only had 6 points and shot 2 for 6 in the game. The Wildcats also did a great job rebounding the ball as they out rebounded Beech 23-14 in the game. A lot of these rebounds came from Adler Kerr and Connor Miller as they each had 7 rebounds. 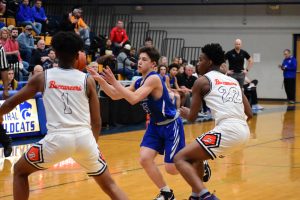 Despite all of these positive things that Wilson Central did, they barely lost the game in the last couple of seconds. That will be the end of the season for the Wildcats, as they will not be advancing to the region tournament. There are a lot of positives to take away from this season and they ended the season on a high note with a close game against Beech.