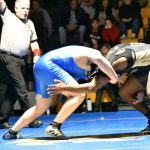 The Wildcats will ride off this hot streak headed into the State Duals, this Friday February 7th, and this Saturday February 8th.