The Wildcats starts the season 2-0 for the second straight season with a  68-58  win over Shelbyville Central High School. Wilson Central led the first quarter scoring affair 15-11 with Caleb Lawrence leading the Wildcats with  7 points. Caleb Lawrence finished with a game high 18 points on 8 of 18  shooting to lead all scorers for the game. 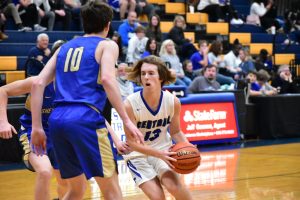 The Wildcats continued with the hot hand in the second quarter going into halftime with a commanding 32-21 lead. Wilson Central did not stop here as they ended the third quarter up leading 49-38. As the fourth quarter narrowed, Shelbyville narrowed the Wildcats lead. Playing good defense and turning that into points, Shelbyville was trying to make a comeback. However, the

Wildcats were to fierce for the Shelbyville Eagles to overcome. Shelbyville ended the game on a high note with a buzzer beater three to close the game with a three to again make the final score 68-58.   Scoring for the Wildcats were Lawrence with 18, Jordan Beard and  Adler Kerr with 13 each,  Coleman Berman 6, Seth Beck 6, Maravich Bond 6, and Connor Miller 4 rounding out the scoring.  The Wildcats hit 8-15 three’s from downtown (53%) while shooting 64% from the floor.

The Wildcats, off to  a 2-0 start, will take on the Stewarts Creek Red Hawks at Stewarts Creek High School on Monday, November 25 at 7:15 followed by a Tuesday match-up at Smyrna. 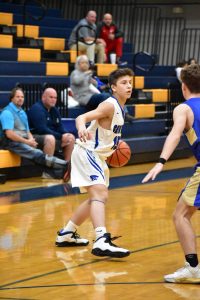