Last night’s Girls Basketball season opener against Springfield could not have been more electric. 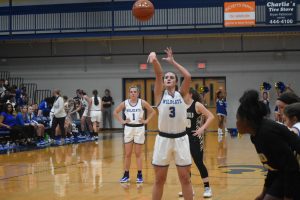 Junior Sydnee Richetto was on fire, as usual, scoring a total of 24 points for the Wildcats. Prior to the tip-off,  Richetto was recognized for scoring her 1000th point at the end of last year’s season. She was congratulated with a basketball in her name as well as a plaque by current record holder and now assistant coach Jasmine Hassell Smith. This accomplishment is a great deal for her, as she was only a sophomore at the time. 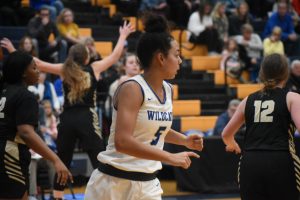 Campbell Strange who transferred to Wilson Central also showed a great deal of promise with her skills as she glued the team together scoring a double double with 10 points and 11 rebounds. The first quarter ended on a high note, as Wilson Central took the lead against Springfield, 18-2. That lead was widened even more at halftime, when the Lady Wildcats held the score of 33-9. The immense support from the Wildcat parents and students uplifted and built the players confidence throughout the game. Great plays were also made by Sydney Dalton, scoring 17 points, and Senior Jasmine Angel dishing out 4 assists while making 4 steals and scoring 4 points. While making 63% of their free throws, 30% of their three point shots, and 40% of their overall shots, the girls dominated. The final score resulted in a win from Wilson Central, 63-31.

Coach Erica Wilson, is in her first year at the helm of the storied Wilson Central program, was proud of 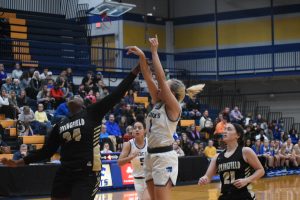 her team and the first game they brought to the table. The Lady Wildcats return to Wildcat Arena to face perennial power Shelbyville at home on Thursday, a change from the previous schedule due to Shelbyville’s football team playing Friday night in the state quarterfinals .  The girls’ goals are clear, and the outlook is optimistic. The Lady Wildcats started off the season with an outstanding performance with their win, further enhancing their desire to play at the Glass House in March.

Come support our Lady Wildcats but if  you can’t, you can watch it live on the NFHSnetwork!!!!