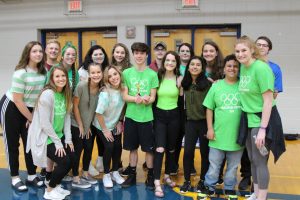 Student athletes were divided into teams that competed in several events, such as the soccer kick, softball throw “egg” run and more.  Incorporated into the event was a simulated track meet held which highlighted a race between the coaches of each of the teams.  The Wilson Central freshman class, along with their teachers, served as a student cheering section for the competitors. Each student was designated to a team, and each team had both an MVP and sportsmanship award .

Organizers of the event, Caroline Simpson Maci Lerno and several other freshman class teachers,  had been working on this event since August.  With the help of local companies sponsoring the event to provide shirts, water and awards the event was a fun time for all involved.  Added to this was the broadcast of the event by the Wilson Central Sports Information Department on WCSN and the Nfhsnetwork.  The even can be seen in its entirety by logging onto the following URL— https://www.nfhsnetwork.com/events/wilson-central-high-school-lebanon-tn/evtd9b05d5e21

Also, yo can view a picture gallery that has been published on the WilsonCentralSports.com website.