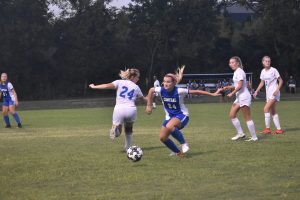 The Lady Wildcat Varsity Soccer Team traveled to LaVergne on Thursday Sept 26. Central opened the game and dominated the Lady Wolverines winning the match by the final score of 4-1.  The Lady Wildcats had a first half goal by Freshman Aubrey Katzenmiller, her first goal of her high school career. With the halftime score of 1-0, the second half began with a greater intensity as Leah Beazley scored for the Lady Wildcats. 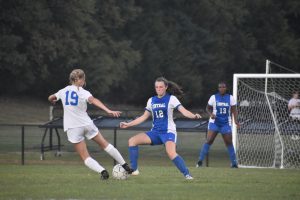 Liv Moser who was pushed down in the box resulted in PK for Wilson Central which was scored by Gracie Aric. After a few serious and unfortunate calls,  the Lady Wildcats found themselves playing a man down playing the last 15 minutes of the match.  LaVergne notched their lone point from a rebound off of a corner kick  while the Lady Wildcats continued to place pressure on LaVergne that resulted in a short handed goal by Emma Covell rounding out the scoring and sending the Lady Wildcats back up 840 with the 4-1 victory.   Next up Wilson Central will traveling  to Lebanon Saturday Sept 28 for a weather related make up game. The JV  match begins at 9:00 followed by the Varsity at 11:00.  Next week the Lady Wildcats will return to Wilson Central High School to play Tuesday against Mt. Juliet and Thursday against Smyrna in the last regular season match before the district tournament begin later in the week.