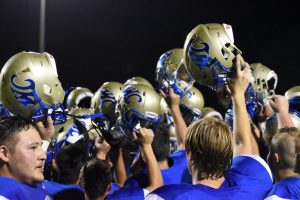 Wilson Central’s Freshmen football team defeated the Vikings of Clarksville Northwest by a score of 36-6.

The game featured several rushing touchdowns, as the Wildcats lived in Viking territory. Tavin Hardin found the endzone on a 10-yard rush, and both Walter Bowers and Damien Kelly recorded 5-yard touchdown runs. The Wildcat defense also helped with the victory. Grant Roundtree recovered a fumble for a touchdown, and the Wildcat defense as a whole forced a safety. Mark Shenouda was 4/5 on his PATs, but Sean Aldridge highlighted the night. Aldridge danced around defenders on his way to a 60-yard kickoff return for a touchdown.

The Wildcats will travel to Lebanon High School and take on Blue Devils Thursday August 29. Kickoff is scheduled for 6:30 p.m.