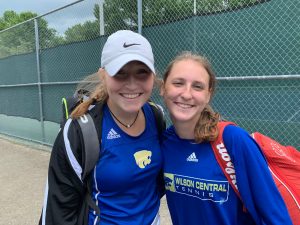 Miller and Westbrook added one more piece of tennis history for Wilson Central on Monday afternoon as the duo routed Clarksville’s Erin Crawford and Anna Howard 6-1, 6-1 to capture the  first girls’ region title in school history and first-ever trip to the state tournament.

The tandem will take on Collierville freshmen Margeaux Britt and Campbell Stewart on Thursday, May 23, at 9 AM.

The state tournament will be held at the Adams Tennis Complex in Murfreesboro.

The Lady Wildcats have played for a region final only once which was last season.

Wilson Central has only had eight girls advance to the region tournament, four of which were this season with senior Abby Moser and junior Kiersten Moss advancing with a district-runner up finish.

Miller and Westbrook join Michael Mercante as the only Wilson Central tennis player to advance to the state tournament.

Mercante made it to the 2017 AAA singles tournament before falling to former Brentwood and current University of Alabama tennis player Sam Fischer in the semifinals.

The improved results and progress of the program is something that Westbrook feels will have a long lasting effect on the program.

“It gives motivation and confidence to all upcoming players,” Westbrook said. 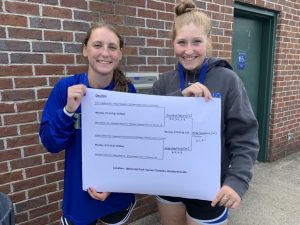 “Sydney and I started out in middle school knowing nothing about tennis, and we have made it farther than any other girl has at Wilson Central so I think that it shows that if you work hard you can definitely do it.”

Miller and Westbrook began playing together just before the start of the season due to a departure that caused a shift in the doubles lineup.

According to Miller, though unexpected, getting Westbrook as her partner was as much enjoyable as it was competitive.

“This season playing with Savannah was something that no one was expecting, but we both worked hard during the offseason so we were able to overcome most anything,” Miller said.

“This year has been nothing but fun and laughter. Every match we play together you can find us smiling one minute and completely focused the next.

The Lady Wildcat tandem opened play with a 6-2, 6-2 rout over Rossview’s Kamiyah Parks and Mary Kim.

“This year I knew I deserved to be in the regionals, and I knew Sydney and I could win it and were very confident.”

Added Miller, “coming off the court after the region final I felt speechless, and I still don’t think it has hit me,” Miller said.

“All I could think about in that moment was how hard the team has worked to get to this point over the past four years.”