On Tuesday, May 7, Wilson Central faced their crossed town rival the Golden Bears of Mount Juliet in a game for the ages. Wilson Central’s stands have never been so full. The Wildcats were tough but in the end, MJ took the win. The following recap is by Coach Geoff German, who could not be there, but instead watched WCSN’s broadcast of the game. If you weren’t there or you want to rewatch the game, you can watch the broadcast again at the NFHS Network. Coach German did an amazing job of coaching the boys this season and everyone’s looking forward to see what he will bring in the following seasons. 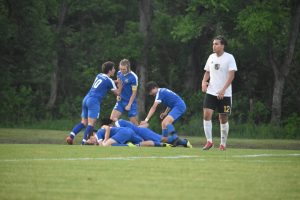 If you weren’t at the match you missed a heck of a game. I was forced to observe the game from my home with my wife (who has a very deep understanding of my love for this sport and for this program) and my two kids (who don’t really understand it yet and looked at daddy numerous times yesterday like he had officially lost my mind). I was able to do this because of the effort of Coach Holladay and his team with the Wilson Central Sports Network. The live feed that I was able to see was just amazing and I will either be making a financial contribution to the WCSN or a time contribution in the lieu of cash because of their value to this school and the effort they put in to covering our sports. It was amazing (outside of the coverage issue I had for a little but that was AT&T’s fault). As I side note here, I will be providing Coach Holladay with a glossary of soccer terminology for next year. I thank and applaud him for his effort yesterday but it’s clear that commentating on soccer games is new to him. (Thank you, Coach).

The game began slowly for the Wildcats. Offensive pressure came early but they withered the storm for about the first 20 minutes. As the teams jostled for positioning and trying to understand what formation and tactics the opposition was presenting, there was not too much action in front of the goals. Wildcat keeper, Bayo Kaloshi, usually has to play in an advanced position for a goal keeper. This year, Wilson Central played with a three back with a high defensive line.This means that they stay pushed up the pitch which has two functions; 1) it condenses the field that their opponents have to travel through, more players in a confined area makes it harder to move the ball, 2) it keeps the opponents attackers further from the Wildcats’ goal because any offensive player behind their line is offside. Most of this game is simply who can utilize space better, especially the further one moves up it’s theirs. Now the drawback to this is that balls can be played over the top into the path of an advancing player that starts their run from 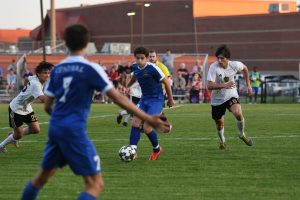 behind Wilson Central’s line, which is where having a keeper like Bayo is awesome, he can sweep in and clear up that long ball and give the defense time to recover and regain their shape. Another drawback is that either through skill or sometimes luck a ball can be played over the top of the defense AND the goal keeper with the result ending with a goal and this was Wilson Central’s fate last night. A shot that normally would be simply caught in the air and played out from the back managed to find its way into the Wildcat’s net. 1-0 Golden Bears and this is the score that the teams arrived at halftime. At the start of the 2nd half, a ball was played in high to Barrett Streeter who jumped for the ball and in the process it appeared as though his cleats were exposed towards the face of an MJ player. The referee decided that this was a dangerous play and ga 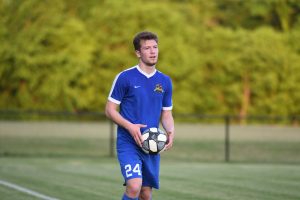 ve Barrett a straight red card. This meant that Barrett was ejected from the game and the Wildcats would go the remainder of the game with 10 men against the 11 of MJ. Sebi Gal-Chis headed on a ball and it flew to the back of MJ’s net. Hysteria ensued on the field. 1-1 The Wildcats are back in it. For 19 minutes both teams struggle to try to finish the other off before the end of regulation but all signs pointed to a stalemate. With a minute remaining the Wildcat defense pushed up in an attempt to apply pressure and they were caught in a counterattack. MJ moved the ball down Central’s right flank, passed the ball across the field to a wide open MJ player who buried it in the net. One minute remaining. 2-1 MJ. It’s a no holds barred attack at this point with 50 seconds left, Bayo is pulled from the net and joins in the attack and he gets trucked by an MJ player who gets a yellow card. The game resumes and precious seconds ticking away as Wilson Central is pressuring and pressuring. A long shot is deflected out of bound by the MJ keeper, eight seconds left, Zach Hinchman grabs the ball runs to the c 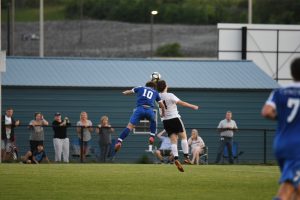 orner flag and hits a beautifully weighted ball into the box. At this point you can hear the crowd counting down, five, four, three…and as time expires Wildcat sophomore, Steven Stone, had a left footed shot that beat the MJ defense and keeper to move the net and tie the game as time expired. 2-2 tie ball game.

For two 10 minute overtime periods, two five minute “golden goal” periods, the game remained tied up. Each team with opportunities that probably should have ended the game but didn’t. The teams were left with penalty kicks to determine the o 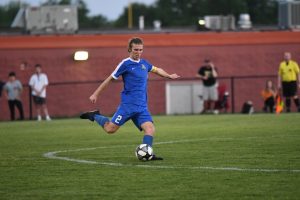 utcome. In the end, MJ prevailed in the shootout 6-5. It was a crazy game, a great year, and in the end this team brought home nine district awards for this program and this school. It didn’t end the way the Wildcats hoped for but it was one fantastic game. Resiliency was something that Coach preached to the boys all year. Fight until you can’t fight any more and the game was the epitome of the resilient character of those players and this team. 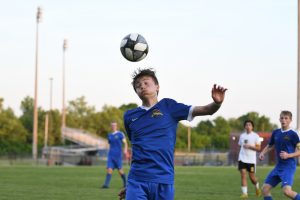 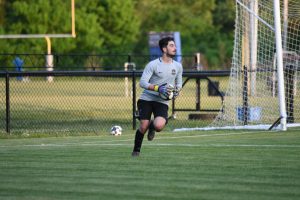 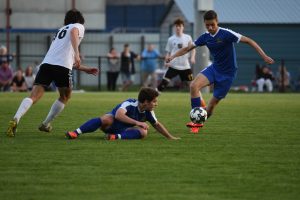 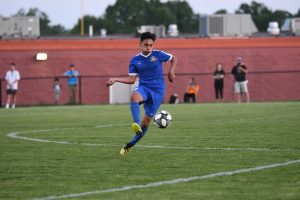 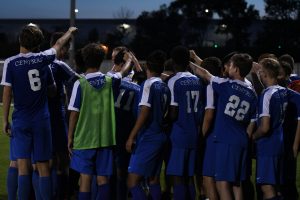 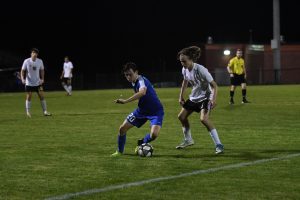 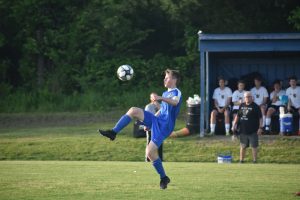