HENDERSONVILLE – The Wilson Central boys and girls tennis teams have little experience playing in a district final as a team.

Some of that inexperience showed up at crucial moments for both squads as the Wildcats fell 4-2 to Mt. Juliet, while the Lady Wildcats suffered a 4-0 loss at the hands of Hendersonville at Drakes Creek.

Wilson Central (13-6) held a 2-1 lead over Mt. Juliet at one point, but the Wildcats dropped the final three matches to give the Golden Bears the District 9-Large boys’ title. 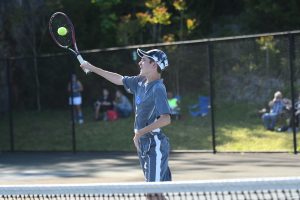 The Lady Wildcats struggled from the outset against a strong Hendersonville squad as Wilson Central (16-3) could not extend the Lady Commandos into the doubles portion of the match.

“The guys had that lead, but the experience Mt. Juliet has really helped them when they were down,” Wilson Central coach Ryan Jent said.

“The last three wins Mt. Juliet got was from their seniors against our freshmen so the experience factor was huge for them today.”

Mt. Juliet freshman Luke Perricone put the Golden Bears on the board first with a 6-0, 6-0 win over sophomore Caleb Brown at No. 5 singles.

From there, Wilson Central grabbed the lead with wins at the top two singles spots. 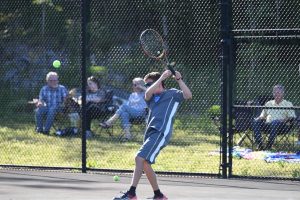 At that point, the experience of Mt. Juliet took over the match.

With Mt. Juliet leading 3-2 heading into doubles, the Golden Bears needed only one point, and they got it at No. 2 doubles with Gamble and Ruesewald defeating Brown and Smith 8-4.

Dillon Smith and Pierce Smith held a 6-5 lead at one doubles when the match was clinched for Mt. Juliet.

“You have to give a lot of credit to Mt. Juliet with how they handled big situations which is something they did very well,” Jent said.

“The moment wasn’t too big for them, and they took control when matches were in the balance, but our kids fought hard and I’m happy for the season we’ve had.”

Mt. Juliet’s district title is the second in three years for the Golden Bears.

“Hendersonville is just so consistent from the baseline, and they really don’t give you anything to work with,” Jent said.

“The culture of the program is that they expect to win, and their kids know how to handle most every scenario you throw at them.”

Hendersonville junior Emily Williams gave the Lady Commandos their first point at No. 5 singles with a 6-3, 6-3 win over senior Makayla Posey.

Senior Katie Lee clinched the match for the Lady Commandos with a 6-1, 6-1 win over senior Abby Moser at No. 3 singles. 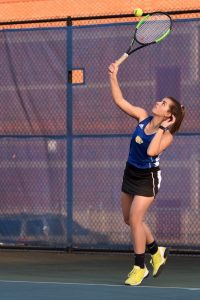 “Our girls really battled well today, and really all season and today doesn’t put a black eye on that,” Jent said.

“Hendersonville found a way to win a lot of big points, but that is what teams of that caliber do.”

The Wildcats have the most of any team playing in the regional tournament.

District doubles champions Miller and Westbrook along with runners up 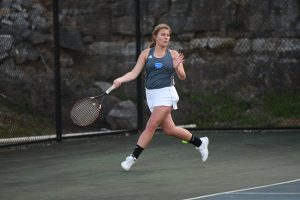 Abby Moser and Kiersten Moss will compete in the regional doubles tournament.

District runner up Michael Mercante will be competing in the boys singles field.