HENDERSONVILLE – After an exhausting Monday and Tuesday (April 29-30) for the Wilson Central Lady Wildcat tennis team during the individual tournament, the District 9-Large team semifinals on Wednesday (May 1) was a struggle physically and mentally.

Also, a determined Mt. Juliet Lady Golden Bears had a lot to do with the Lady Wildcats’ struggles.

However, Wilson Central (16-2) managed to gather themselves to claim a 4-1 win.

The win puts Wilson Central, the tournament’s number two seed, in the finals against top seeded Hendersonville on Monday.

Since falling to Mt. Juliet in the 2017 district team tournament, Wilson Central has claimed the last three meetings from the Lady Golden Bears.

Four of the Wilson Central players advanced to the doubles finals the day before, and with that much tennis over the course of two days, the energy level appeared to have been a bit low. 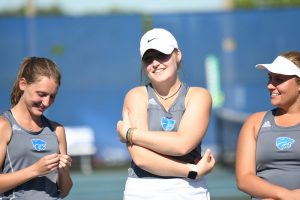 However, senior Sydney Miller took it on herself to pick up her team.

Miller constantly pushed her teammates on surrounding courts to pick up the effort which they did.

According to Miller, it’s something her team has done all year when they’ve needed each other.

“During my match, whenever I get the chance to yell out to my teammates to encourage them we all start doing it and it helps me, too,” Miller said.

“I think when we hear it and start cheering each other on it helps us in so many ways,”

This time it was Mt. Juliet who was quick out of the gates.

Miller closed out Fanous 6-1 in the second set. 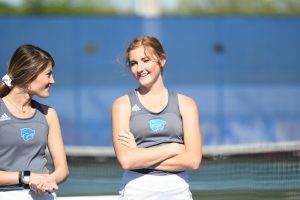 Makayla Posey gave the Lady Wildcats their first point of the afternoon with a 6-1, 6-1 win over Cecilia Demoski at No. 5 singles.

Earnhardt put Mt. Juliet on the board with a 6-4, 6-0 win over senior Savannah Westbrook at No. 1 singles.

Wilson Central pulled to within one point of the win with junior Kiersten Moss downing Lydia Brandes 6-0, 7-5 at four singles.

Miller and Westbrook clinched the match with an 8-4 win over Brandes and Earnhardt at No. 1 doubles.

“Before last year we’d never beaten Mt. Juliet, and before it was always upsetting when we couldn’t pull it out against them,” Miller said.

“Putting this season in perspective we’ve been able to showcase the hard work and dedicating that this team has been striving to achieve.”