Wilson Central won 2 of their last 3 games in the Wilson County Invitational, losing to Plainfield Central (IL) 14-2, then defeating Smith County 10-3 and Page  2-1. 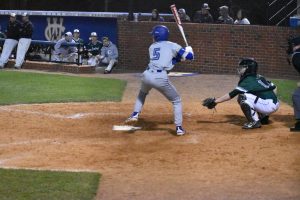 The matchup with Smith County looked to be a shutout early, but a late 3-run effort from Smith County gave the Wildcats a scare in the top of the sixth. The Wildcats jumped out to a 4-0 lead by the fourth inning, notching another in the fifth. However, a three run top of the sixth from Smith County brought the score to 5-3. Wilson Central answered back with a big 5-run inning in the bottom of the sixth, and Gabe Jennings tallied his second career home run, which was also his second of the weekend. Kameron Bond had a strong performance on the rubber, throwing 5.2 innings with a trio of strikeouts. The Wildcats also scattered 10 hits throughout the game.

The final game of the Wilson County Invitational was a thriller against Page. Nick Baker was set for a pitcher’s duel with nephew of prominent country singer Luke Bryan. Wilson Central jumped out to a 2-0 lead with a run scored in the first and fourth innings, but Page answered back in the sixth, swinging the momentum their way. Baker lasted 4 innings before being taken out of the game, as freshman Wyatt Guethlein entered the game for a 3-inning save. Guethlein’s pitching, which closed the game with a clutch swinging strikeout, and the Wildcats’ strong defense brought them their seventh win of the season and a 3-1 record in the tournament.

The Wildcats now sit at 7-3 and will take on the Bears of Mount Juliet at home on March 26. The game starts at 7:00p.m., and it will be broadcast on the NFHS Network.