The Wildcats traveled to Shelbyville for their first taste of football of the 2017 season.  Wilson Central scored twice in the quarter as Zae Kern scampered 50+ yds on the Wildcats first possession.

Shelbyville answered a few minutes later on a 30+ yd run to tie it at 7.  With less than :50 sec to play, quarterback Dylan Carpenter found Senior receiver Dalton King for a short 2 yd pass and catch to take the lead and the win over the Eagles.  Wilson Central will open the 2017 regular season as the Buccaneers of Beech High School makes the trip into the Glade.  Gametime is set for 7:00. 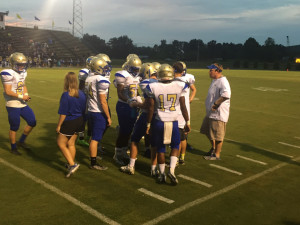 Don’t forget if you can’t make it to the game, WCSN will again broadcast over the NFHSnetwork.  Log into www.wilsoncentralsports.com and follow the links.  Get your subscription updated now for $45 which will allow you to see all Wilson Central streamed events for the 2017-18 school year.  50% of your subscription rate is returned to the WCSN broadcast team.  GO WILDCATS!!!!!!